Come and join us for an informative breakfast with Lance Walker, CEO - WREDA 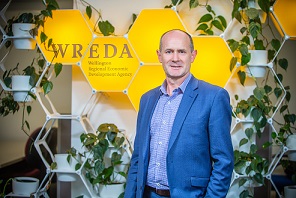 Lance Walker has been the CEO of WREDA, the Wellington Regional Economic Development Agency, since April 2018.  Prior to that he was CEO of Cigna Life Insurance and CEO of Loyalty New Zealand – which runs the Fly Buys loyalty programme.  Having graduated from Victoria University with a law degree, Lance began a career in marketing which led to him become Managing Director of two different marketing agencies in Wellington. He is also currently a Director of the Human Resources Institute and a former Chairman of the NZ Marketing Association.

Having now been in the role for just over 3 months, Lance will share his views on the role that WREDA plays in regional economic development and the priorities for WREDA in the year ahead.

Come and join us for an informative breakfast.