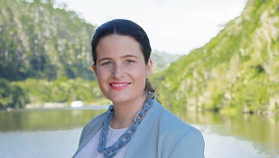 Nicola Willis is a List MP based in Wellington and is National’s spokesperson for Early Childhood Education, having entered Parliament in April 2018.

Nicola was born and raised in Wellington.  After stints living in Auckland and Christchurch, Nicola returned to her home-city to campaign for the National Party in the 2017 election.  Today, together with her husband and fellow-Wellingtonian Duncan, she is raising her family in the capital, with four children aged from two to eight years.

Prior to becoming an MP Nicola had a successful career spanning the private and public sectors.  After graduating Nicola worked as a researcher and policy adviser for then Opposition education spokesperson the Rt Hon Bill English.   Nicola went on to serve as a senior advisor to the Rt Hon Sir John Key, as a member of his winning 2008 campaign team and during his first term as Prime Minister.

Nicola left the Prime Minister’s office in 2012 to pursue her career at dairy co-operative Fonterra.  She was motivated to improve her understanding of New Zealand agribusiness and what it takes for Kiwi exporters to succeed on the world stage.   Nicola was promoted through a number of roles at Fonterra, including a stint as Director of Global Stakeholder Affairs, with responsibility for Fonterra’s trade strategy.  In her final role as GM Nutrient Management, Nicola led a large operational team working to improve the environmental performance of Fonterra-owned farms throughout New Zealand.

Nicola has served on the Boards of Export NZ and the New Zealand Initiative.  She has a first-class Honours degree in English Literature from Victoria University of Wellington and a post-graduate Diploma in Journalism from the University of Canterbury.   She was a successful University debater, captaining New Zealand teams, winning numerous national tournaments and competing around the world.

Nicola is a member of Parliament’s Education and Workforce and Regulations Review Select Committees and is a committed “Bluegreen”.